Wamlambez and wamnyonyez are two sheng words which are commonly used by youths. Wamnyonez means sucking while wamlambez means licking. They are sexually used by youths when they are referring to someone who likes sucking and licking especially a person of opposite sex.

Initially, the word was being used by youths to demonstrate how ice cream is being licked and sucked but it was later taken out of context.

In Nairobi there is a kiosk known as wamlambez,Wamnyonyez that sells ice cream,this is where the words orgininated from.The kiosk is located in Eastleigh.

Below is the photo of the kiosk: 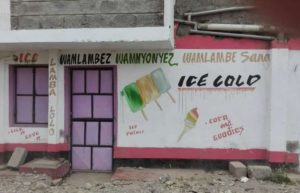