There are many ways of detecting fake Ksh1,000 note in Kenya. Since the introduction of the new currency, there have been reports of fake Ksh 1,000 notes; it’s therefore important to know the features of new notes.

There is no major difference between the new and old Ksh1,000 notes, only the size and colour that differ. Key features of the new notes include, Portrait Watermark, Serial Numbers, See Through Feature and Security Thread.

To know that the Ksh1,000 is fake or genuine, look at the following features:

For the 1000 and 500 shillings denominations, the thread is thicker and portrays a colour shift when viewed at angles.

The 50, 100 and 200 shilling denominations have a thinner thread, silver in colour, and do not depict any colour shifts when viewed at angles. 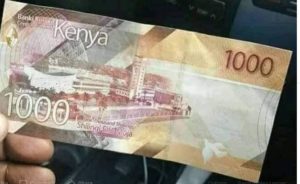