Majority of Kenyans have refused to contribute to blogger Robert Alai despite his humble appeal to Kenyans to foot his legal fee.

Alai, who is facing terrorism charges, declared he is broke and that he wants at least Ksh200,000 to hire a lawyer to handle his case. But nearly every Kenyan is not on his side as they claim he is arrogant and disrespectful. In 2018 while he was in jail, Kenyans contributed heavily towards his cash bail, upon his release, he never appreciated but instead responded to Kenyans with insults and chest thumping.

At one time he bragged that Ksh200,000 is nothing to him, it can’t even sustain him for two weeks. Kenyans are wondering where the money went despite all the chest thumping. 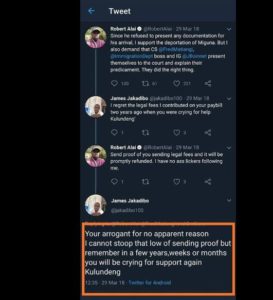