As others were typing RIP,Bel Akinyi was busy drafting a note condemning the late Safaricom CEO Bob Collymore,what befell her next will forever leave a scar in her heart. Few minutes after posting against Bob Collymore, her account was suspended.

The controversial blogger and activist had posted that Collymore was a corrupt CEO who married a Kikuyu. The statement didn’t augur well for the social media platform, her account was reported and consequently suspended.

Below is what she wrote that prompted the suspension; 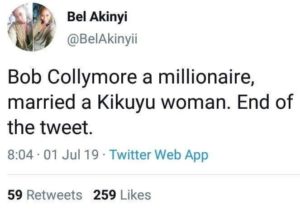 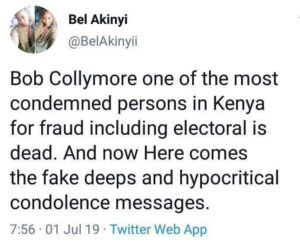 If you must write negative comments, it’s better you start a blog where you are not censored by everyone, otherwise in social media you’ll not enjoy absolute freedom.