A man who received presidential award for eating githeri during voting has been spotted drunk and disorderly.

The changaa addict was spotted in Kayole yesterday drunk and unable to move any of his organs. His head was comfortably lying on a wheelbarrow as he slept like an exhausted donkey.

Githeri man was given unspecified amount and a plot in Ngong immediately he received presidential award,but he has squandered all the money on women and drugs. His situation is so serious that even a rehabilitation center won’t salvage.

Below is how the new Githeri man looks like: 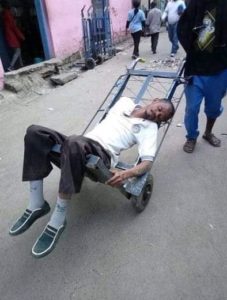