Fake Jesus has taken Kenya by storm. Thousands of worshipers lined up in the streets of Nairobi to welcome fake Jesus. A popular pastor had invited the man who is believed to be a conman so as to attract crowds to his churches.

The first stop was in Kitengela where Jesus arrived in a convoy of sleek cars as he greeted curious onlookers. He later attended a sermon at Kitengela which was attended by thousands of people who purposely came to see him.At the end of the sermon, attendees were reminded that paying tithes is appreciating the work of God and since Jesus was around, it won’t augur well for them if they fail to pay—the pastors collected over Ksh20 million.

These people were targeting populous areas; their next stop was at Githurai.Here they met thousands of gullible people who were attracted to the fake Jesus. After the sermon, millions were collected by the pastors.

The fake Jesus has now disappeared after getting his due. Below are photos of the conman: 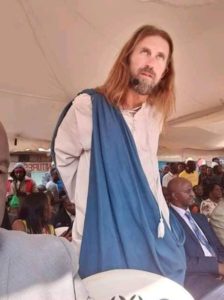 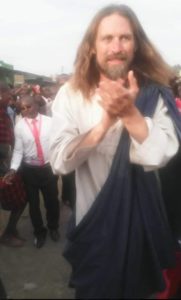 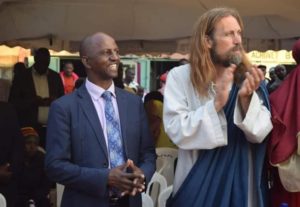