Below is the sad story of Kelvin Nyambura, a Kenyan man who has attempted suicide 10 times but he has survived out of God’s grace.

I was headed to work when a masked man had laid an ambush for me and threw acid on my face. It was early morning hours
It started to burn. I felt so much pain on my skin. I began to scream and run around as I kept peeling the burning clothes off my chest. Found a tap Started washing my face with water in tears and pain. No one was coming to help. Luckily enough i got a t-shirt from a security guard who was around.
I kept my eyes shut the whole time because i could feel the acid on my face and unfortunately it had started burning my eyes. All that i could see was smoke look like stuff. I got a friend who rushed me to hospital but unfortunately it actually took longer to get relief. For around 3hours unattended and still the acid was eating me up strongly..My face started turning black in colour and hard.

For 2weeks i stayed blind, no treatment offered on my skin and the wound started becoming septic. Pus started coming out of my skin. only eyes were attended and i could doctors saying i might not see again.But God opened my eyes again.May God’s name be glorified.

Later, was admitted at Kiambu hospital and after getting discharged , I kept going in and out for treatment and surgeries at Kenyatta National Hospital.

Sadly, the perpetrator was never found. Since it was dark and the person was wearing a cap and a scarf over most of the face, i did not notice any details about the person.

One year plus was really tough for me. I lost my sense of self. My identity was just a dream. I actually kept telling myself that everything from the night of the attack was just a bad dream that I would one day wake up from. I was still healing, yes, but also, I didn’t want to be seen. I hid all scars I had on me, or tried to.

My skin and face changed. This was my biggest source of pain and heartache. I felt robbed of my life. I was not happy anymore. For a while, nothing made sense.

I kept thinking about my life before, my skin before, and would compare myself to other men out there. I found hating myself day after the other to an extent that i tried to kill myself twice.

Later, i managed to get counselling spiritually, emotionally and psychologically.
These among others, helped me learn how to live with this new skin and face. One day at a time, I found myself again, and what’s more, I started liking the new me…I love my whole self. I’m not the same Kelvin I was before the attack. Actually, because of the attack, I push myself more to go after what I want and to work on myself to be the best version of myself.”

I have learnt more about my new life and myself, and I started being proud of who I was becoming despite what I had gone through.”

And to whoever did that, i forgave him….
I did let it go, and i let God

ACCEPTING ONESELF AND FORGIVING THOSE WHO HURTS YOU IS LIKE HELL, BUT NO SHORTCUT, FOR BETTER LIFE YOU MUST ACCEPT YOURSELF AND FORGIVE THE PERPETRATORS 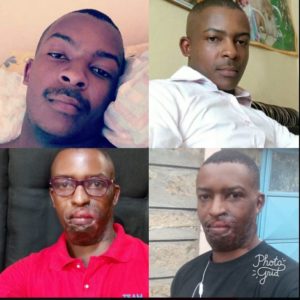