Raila Odinga’s planned meeting with delegates from Mt. Kenya failed to materialize after the delegates boycotted the much publicized event.

Efforts by the organizers to reach on phone the said delegates proved futile as their phones were off.
The delegates were organized by mungiki leader Maina Njenga.
The ODM leader Raila Odinga and Mungiki leader Maina Njenga were left waiting at Chungwa House for hours prompting the meeting to be called off.
ODM Director of Communication said the meeting had been postponed to a later date.
“Due to unavoidable circumstances, the event scheduled for today at Chungwa House has been postponed to a later date”.

The Nairobi Business Community had endorsed ODM candidate Imran but it indicates that a call from above stopped the interaction between Raila and Maina Njenga’s people. 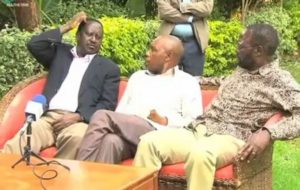