The officers were interdicted today 12 November 2019 after Interior CS Fred Matiangi intervened and informed the bosses at Police Headquarters to take action.

“The National Police Service wishes to inform that the four officers who were caught on camera meting excessive force on a JKUAT student have been identified and consequently interdicted from the service as per police procedures. – IG NPS”,read a statement from the NPS.

The viral video was captured by students of the university and shared on social media. Within few minutes, the video went viral, forcing leaders to pressure the Interior Ministry to take action against the police involved.

The student in question was harmless and was calling for help during the beating. Police were responding to calls by JKUAT university to calm students who were rioting. 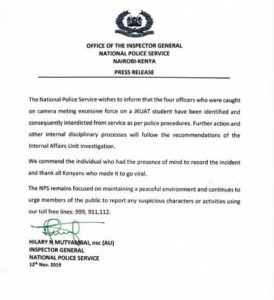 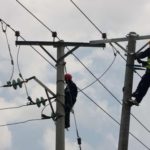 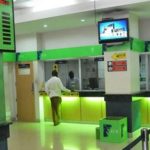