Embattled blogger Dennis Itumbi has been ordered to pay Ksh20,000 every month for child maintenance. The Innovation, Digital and Diaspora Communication Director in the Office of the President had demanded for DNA test to be conducted before taking responsibility. Yesterday, it was confirmed that he is the father of the baby girl.

The mother of the child took the blogger to a children’s court where it was determined that he must pay Ksh20,000 every month as child maintenance fee. In addition, the court indicated that the final verdict may see the amount rise to Ksh50,000

Dennis Itumbi dated with the anonymous lady for one year and when he was told that a baby is on the way,he dumped her. The lady sued him for child support. Itumbi then demanded for DNA test which proved that he is the father of the child.

The mother of the child, through family law advocate Enricah Dulo, says among their demands in the proposed out-of-court settlement deal is Sh50,000 monthly maintenance, a medical cover and school fees when minor starts school. 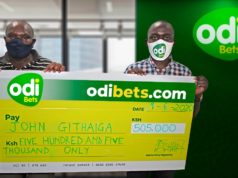