A woman is in trouble after her husband of 7 years threatened to cheat on her if she accepts a scholarship to study in the UK.

A troubled woman has messaged relationship counselor, David Papa Bondze-Mbir on something bothering her mind.

According to her, she had her Masters Degree before marrying her husband and they all agreed that she’ll pursue her Ph.D. after they have 2 children

Now, they have two adorable children who’re 5 and 6 years and the woman has been given a full scholarship to pursue her Ph.D. course in the UK but the man said she should not go.

His excuse is, he also has a Masters Degree and he’s doing fine so he doesn’t understand why the woman would love to further while he has not

As it stands, the woman’s mother and mother-inlaw have pledged their support to take care of the kids while she’s away.

But her insensitive husband is now threatening that should she leave to pursue her education, he’ll have no choice than to cheat on her.

Read the ladies’ message to Dave below: 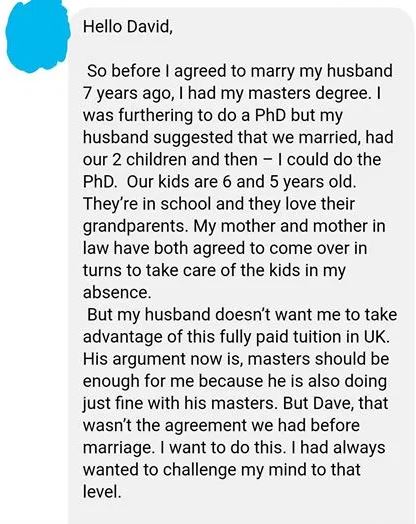 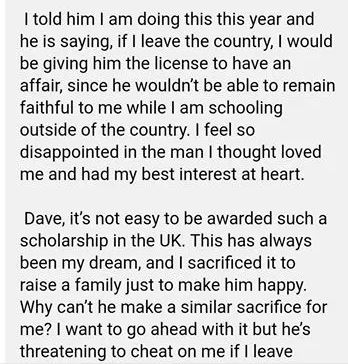 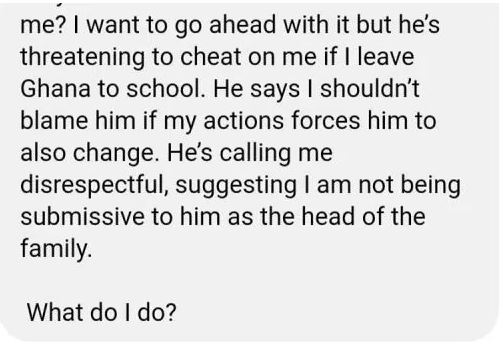