Yvonne Okwara’s husband is called Andrew Matole Konde. Yvonne met her husband, Andrew Matole, in his office when she had taken her sick pet for treatment.

Okwara was 31 years old at the time while her soulmate, a veterinary surgeon, was 47.

Her attempts to keep their union lowkey was, however, futile and shortly after she got married, people started trolling her demanding an explanation why she married a man who was over a decade her senior.

Andrew was 47 and Yvonne was only 31 when they got married in 2014. The KTN anchor was asked about the huge age difference and she stated that it was not a bother to her.

Yvonne Okwara exchanged vows with her husband Andrew Matole in December 2014. Her wedding was shrouded in secrecy and people speculated it was because of the other woman.

Andrew Matole was previously married to one Alice Manyola Matole and they have three children together. Andrew is 16 years older than Yvonne Okwara and this has been an issue to critics.

Below are the photos of Andrew Matole Konde 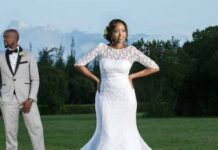 August 13, 2022
A total of 12 Azimio Senators have so far been confirmed by the IEBC.More names will be confirmed over time. The list of elected Senators...

August 13, 2022
We have compiled a list of Kenya Kwanza elected Senators in 2022.Though the list is not complete, at least 9 of them have been...

August 13, 2022
A total of 13 Kenya Kwanza Governors have so far been elected in2022.Susan Kihika and Anne Waiguru are some of the governors who trounced...

6 Important things that must happen before IEBC announces Presidential result

August 13, 2022
There are 6 main things IEBC must do before they announce the final result of the presidential tally.To know who has won the election,...