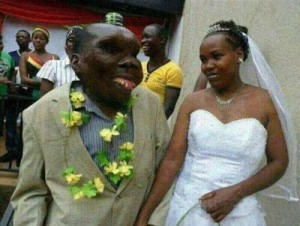 Godfrey Baguma is a happy man this week as he welcomes his eighth child;we are not sure whether it’s the last born or the race is still on.
Sebabi as they call him,which means “ugliest of all”,married his second wife Kate Namanda, 30, in 2013.They have managed to welcome four children since 2013, two of Sebabi’s children came from his first marriage.
“I caught her cheating with another man and I assured her our relationship was over. She liked me because of my money, but people kept telling her that she could do better, so she started eloping with another man”,Said Sebabi.
Explaining of his first marriage,Sebabi blamed the ex wife of infidelity,which prompted him to chase her away and start a news life.
“I stayed with her four years before her people knew where she was. I didn’t want them to see me until we had a child because they would definitely advise her to leave me. She left me when she was six months pregnant but I think she later accepted her fate because she came back two months later. I told her that I didn’t choose to look the way I do and that if she feels I am a burden, she is free to live me. But she chose to stay and in 2013 they held a wedding ceremony that put his hometown Kyazanga, in the Lwengo District of Uganda, at a standstill. Guests at the wedding had to pay 4,000 Ugandan shillings (about 70p) to attend the reception and see the woman Sebabi married”,confirmed Sebabi
The two have enjoyed life without drama and Sebabi is optimistic that their relationship will survive till death separate them.