Janet Kanini Ikua was buried Saturday 8/4/2017, marking the end of her journey on this earth.

The former NTV journalist succumbed to Lung cancer after a long and painful suffering. As they say, what has a beginning must have an end,and that’s what the 38-year-old fulfilled.

Janet will forever be remembered as a fighter, an inspiration to thousands of Kenyans who are battling cancer. Though her life came to an abrupt end, we all appreciate the role he played on our lives. Thank you God for ensuring her presence was felt-we have every reason to celebrate her life.

Janet Kanini’s funeral service was held at Nairobi Baptist along Ngong road .Her body was ferried to her husband’s home in Naromoru, Nanyuki town, where she was buried on Saturday.

Below are some of the photos from her funeral. 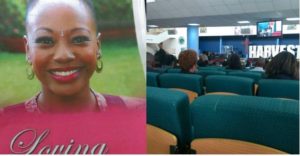