The teenager died at George Mukhari Academic Hospital in Ga-Rankuwa, outside Pretoria, last night.She was rushed into the hospital after she complained of severe pain.

Phalatse was one of two South African girls living with the rare genetic disorder, which causes rapid aging. There is no cure. Her doctors predicted that she would only survive until her 14th birthday.

Last month, she was granted her wish to meet with President Jacob Zuma.

Progeria, also known as Hutchinson-Gilford progeria syndrome (HGPS), is a rare genetic condition that causes a child’s body to age fast. Most kids with progeria do not live past the age of 13. The disease affects both sexes and all races equally. It affects about 1 in every 4 million births worldwide.

A single mistake in a certain gene causes it to make an abnormal protein. When cells use this protein, called progerin, they break down more easily. Progerin builds up in many cells of kids with progeria, causing them to grow old quickly.

Progeria is not inherited, or passed down in families.

Most kids with progeria look healthy when they’re born, but they start to show signs of the disease during their first year. Babies with progeria do not grow or gain weight normally. They develop physical traits including:

Progeria doesn’t affect a child’s intelligence or brain development at all. A child with the condition isn’t any more likely to get infections than other kids, either.

Ontlametse Phalatse was among millions of children suffering from this condition. She has battled the disease for years, until her sunset yester night. 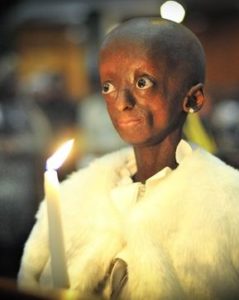