There is heavy presence of police in Busia after it emerged Paul Otuoma has been rigged out by “hated” Sospeter Ojaamong.

Ojaamong, the outgoing governor, is currently leading with a margin of 50,000 votes after Teso votes were added to his previous paltry 40,000 votes.

It has emerged that governor Ojaamong miraculously garnered 105 % of registered votes in Teso to trounce his closest challenger, Paul Otuoma.

Supporters of Paul Otuoma aregoing on rampage as they demand their man be declared the winner. This drama has attracted the attention of police, who are now guarding the governor and business premises in Busia.

Below is the real picture on the ground. 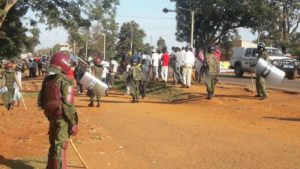