Uhuru, who is a wealthy entrepreneur and son to the first president of Kenya, imported the car last month at a cost of approximately Ksh40 million, the current market value of the sleek toy.

The car was seen parked at Harambee Avenue, Nairobi where the office of the President is located. It had the coat of arms and national flag.

The two other Kenyans who own the car include Sportpesa CEO Ronald Karauri and business mogul, Chris Kirubi.

Below is a photo of Uhuru’s car. 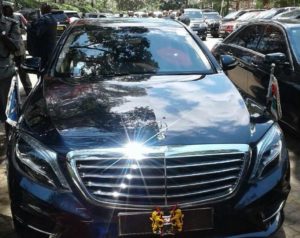