Wetangula had initially sought to know why Matiangi did not seek the services of a lawyer before banning demonstrations in Kisumu, Nairobi and Mombasa. Matiangi, who did not beat around the bush answered, replied:

The NASA principal went mute for a while before he answered:

“That is exactly what you are.Arrogant, distasteful, and unfit to hold public office”.

Matiangi did not reply him, leaving Wetangula dejected.

Here is the conversation. 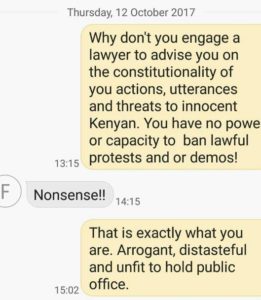