The Governor was spotted supervising the contractor who was doing final touches on his 10-bedroom house. The house stands on 3-acre compound and is built on a modern design.

Stephen Sang clinched his current seat few months ago. Before then, he was the Senator of the same county. His combined salary for 7 years is Ksh 80 million. 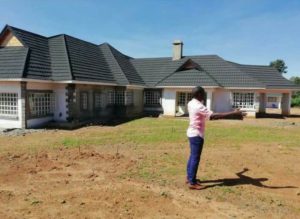