Political Analyst and Jubilee sympathizer, Mutahi Ngunyi has agreed that Raila will win this year’s presidential elections but has warned that his presidency will bring trouble to the nation.

In a stingy tweet,Mutahi describes Raila as a trouble maker, someone who cannot lead Kenya without trouble. He believes it’s only Kalonzo who can bring peace to the nation.

Mutahi’s opinion comes at a time when NASA is about to announce Raila as their flag bearer, something that will happen as soon as this weekend.

NASA is projected to win this year’s elections by 51 % 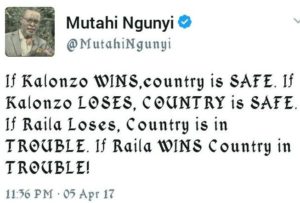