Abisai, who was a tailor before he won the jackpot, flaunted his new German machine to jealous Kenyans and his family members. The S class Mercedes, which retails at Ksh 33 million, has finally landed in the country and is expected to cruise on the Kenyan roads.

We also have information that he is planning to relocate from his current dilapidated apartment in Kasarani to Kileleshwa in a Ksh 150,000 monthly apartment…he is currently looking for a house in this leafy suburb.

Sources close to him say the Luhya man rejected several offers, some of them from financial advisers who wanted him to invest the money in Money Market or Bonds; he instead opted to have all the money in his bank account. 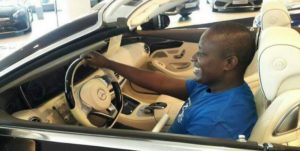