Home LATEST NEWS This is The Mistake  Raila Has Done That Will Send Him To...
Twitter
WhatsApp
Linkedin
Email
Telegram

The NASA leader declared this week that his party does not recognize Independent Candidates. In his unpopular speech, he urged ODM supporters to vote for ODM candidates and ignore the so called independent candidates.

His speech has been heavily criticized by ODM members who have spotted Raila’s short sightedness. They believe that ODM nominations in most parts of the country, especially Kisii and Busia were not free and fair. Most candidates who were rigged out submitted their names as Independent Candidates. It is expected that most of these politicians will outclass ODM nominees in the forthcoming elections.

By Raila refusing to recognize Independent Candidates, he leaves Uhuru with a golden opportunity to embrace them and gain thousands of votes from the candidates’ supporters.

Since Raila is not a clever politician, this silly move will cost him even a million votes.

December 2, 2020
The only way you can win a jackpot like Betika is by betting for it regularly. If you...

December 2, 2020
We have a total of 11 free soccer predictions today which every subscriber will benefit from. You can...

December 2, 2020
First, before you bet for Champions League matches, receive our 100% sure betting tips and see the amount...

December 2, 2020
We are offering 2 sure correct score tips today to all our subscribers. Yesterday 5/6 games we sent... 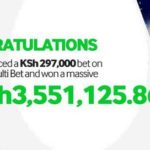 November 26, 2020
Giant betting company Betway lost Ksh3.5 million after one of the punters won the amount by placing a...

December 1, 2020
We are offering 6 versions of the analyzed Betika midweek jackpot to all our subscribers. If you need...