According to BBC,medical reports show that Salah’s bone dislocated and it requires at least 3 months to be fixed. The 2018 world cup is in three weeks’ time, which means the EPL Golden Boot holder won’t participate in the tournament.

Salah was injured by Sergio Ramos who intentionally pulled his hand as they were falling on the ground. The end result, Salah injured. The absence of Salah in yesterday’s match disoriented Liverpool team which eventually lost to Real Madrid.

The absence of Salah in Russia is a blow to Egyptian squad and Africa at large. 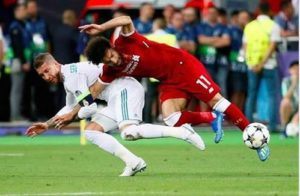