There was drama in Kawangware yesterday when a Kisii man divorced his wife two months after a wedding. Mochache had been seeing his long time girlfriend,who works at a salon in Dagoretti Corner.Last month he decided to settle with the beautiful lady.

For the past one month the man had been waking up at 5.30 for work,leaving the wife sleeping.But yesterday morning,things happened.The woman was the first one to wake up and as the man was taking a keen look at her,he noticed the face had big black spots and she was looking like a ghost.”obe,inki eke”,Mochache screamed.The lady hurriedly rushed to the bathroom to apply a make up,but Mochache was quick to catch up with her.She took a photo which she sent to his friends.

“I didn’t marry you,I married the beauty I have been seeing in the salon.Panga nguo zako kwenda”,he told him while throwing the woman’s clothes outsde.The marriage ended.

Here is the photo of the woman: 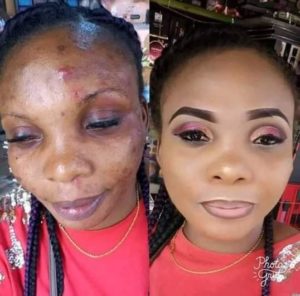