The family of the man who died after he drove his vehicle into the Indian Ocean last weekend, claim he had endured years of domestic abuse from his wife.

The victim’s mother Musangi Mutinda accused her son’s wife of misrepresenting issues and being economical with the truth.

In an interview with the Nation at her Kyanika village home in Kitui County, the grieving mother revealed that her son John Mutinda was still recovering from severe burns inflicted by his wife who scalded him with hot water last month.

“My son died out of depression and despair because of the domestic violence and marital anguish he endured at home.

“It is therefore wrong for his wife to insinuate he had gone mad” she said.

The visibly angry mother said the wife was the reason his son decided to take his own life because life with her was unbearable.

Holding the photos of his son with burn wounds all over his chest, Mrs Mutinda said the wife’s misrepresentation of facts had aggravated the pain of losing the father of three children.

“After he scalded him with hot water, the wife rushed to lodge a complaint at Central Police Station Mombasa, prompting police to lock up my son in custody for four days” the mother said adding he was released without any charges being preferred against him.

The wife asked the reporters who went to confirm the story to let her mourn in peace. That she can explain the burns to the family only. (Photos- the man, in recovery and the wife) 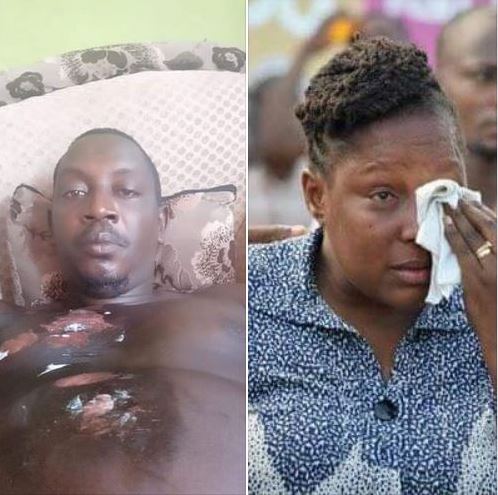