Breaking news from IEBC indicates that Wafula Chebukati has not resigned from his position as the IEBC Chairman.

Fake news from Chebukati’s enemies drafted a letter indicating that the Chairman has  tendered his resignation today morning due to pressure from the executive and other IEBC commissioners. The letter reads:

“It is with a heavy heart that I have taken the decision to tender my resignation as the Chairman of the Independent Electoral and Boundaries Commission. It is not a decision I have taken lightly and I would have wished to serve my term to completion but circumstances beyond my control have rendered my stay in the office untenable” 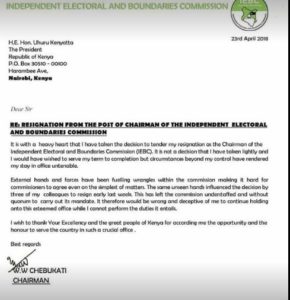 However,IEBC has clarified that the letter is fake and that Chebukati is firmly in office.