It’s emerging that President Uhuru Kenyatta and his deputy William Ruto are planning to unveil 5 choppers and 3,000 top of the range vehicles for 2017 presidential campaigns.

The president and his deputy are expected to receive the choppers any time from now and also unveil the vehicles-some of them armoured-next month.

From a reliable source, the president has vowed to run a well-oiled campaign, like never before, to beat the tired opposition leader, Raila Odinga and ensure he retires peacefully and exhausted.

In 2013, Uhuruto had only 2 campaign choppers while Raila had one. This time Raila and co-principals will have 4 choppers while Uhuruto will have at least 5 of them.Uhuru is also expected to receive more choppers and campaign cars and trucks from friends, who are mostly tycoons from Central Kenya.

NASA and Jubilee are expected to spend at least Ksh 15 billion each on campaigns. 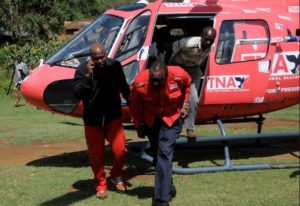 November 26, 2020
Today there will be plenty of football matches which we have analyzed and sampled the best. Apart from...