The accident that claimed John Macharia’s life can be compared to one that killed fast and furious actor Paul Walker in 2014.The SK Macharia’s son was driving at a speed of 210 km/h at the Southern Bypass.His girlfriend was sitted next to him.

John tried to negotiate a corner but his vehicle’s peed was so much that the wheels failed to make a turn.It rolled several times.Macharia’s almost lifeless body was lying inside the completely destroyed Ksh30 million car.The fgirlfriend,who woke up on the right side of life,was slightly injured.

By the time police were arriving at the scene,John was half dead—only  the blood was warm.But his skull had been opened and blood was oozing beyond control.The first police to arrive was overheard saying,”huyu kijana ameenda”.But as a norm,they had to rush the body to Karen Hospital so as to be officially confirmed dead.

John Macharia is the same person who hit a Prado last year due to careless driving.He didn’t learn from the accident.Today God decided enough is enough,’you’ll die’.

Below is how the speedometer read by the time the accident occurred: 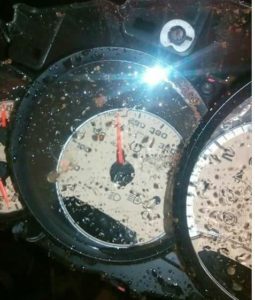